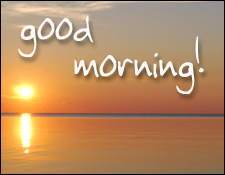 Joe and Stacey work next to each other. They sit no more than five feet apart.  Even though they often arrive at work before the rest of the team, there’s no communication between them.

No morning greeting.  No acknowledgment that they are sharing the same office oxygen.

Career advice experts agree that saying ‘good morning’ should not be difficult. Yet, there’s an increasing trend, almost a rebellion, against saying these two simple words to our co-workers.  It’s not like we’re required to salute, bow, kneel or curtsey.  Even a casual nod and mumble would be a lot better than the nothing that’s now occurring at far too many work sites.

Don’t become part of this alarming trend.  Experience the power of ‘good morning.’

1) It maintains the standards of basic civility that we’re all entitled to at work. Like ‘please’ and ‘thank you’, these two little words also go a long way towards improving communication and the overall atmosphere.

3) Provides for a more democratic environment, where everyone from the CEO to the mail clerk gets to share in a friendly two-second exchange.

4) It’s quick (and relatively painless).  If it is painful, you should probably be looking for a new job or scheduling time for some serious self-reflection.

6) Acknowledging the mere presence of someone is interpersonal communications 101.  Don’t YOU want to be noticed?  You might tell yourself otherwise, but at the end of the day, we all want to be recognized.

7) Saying ‘good morning’ makes things less awkward when you inevitably have to address your co-worker later in the day.  Start the day off on the right foot and avoid potential stressors later in the day.

According to Psychology Today, early risers are more agreeable than those who prefer the P.M. hours. Morning people also have more stable personalities and lower levels of aggression, supporting the idea that serotonin is involved in keeping both moods and circadian rhythms regular. Gives new meaning to “you snooze, you lose.” So if someone is avoiding saying hello in the A.M., you just got a sneak peek into their psychological world.

The start of each new day has a mystique about it. Think about it – most religions have morning services, a sunrise continues to serve as a generic symbol of hope, and a good cup of morning coffee is still (and rightly so) worshiped. Whether we like it or not, we all partake in some semblance of this daily routine, no matter who we are, what we do or where we work. Making the words ‘good morning’ part of that routine is part of the process to Make Work Better.  If we can’t make even the most measly effort with our co-workers, it says a lot more about you than you might care to admit.

Related Links:
The Death of the Office
Nepotism Puts Your Career in Jeopardy
Livestock Get Branded, We Get Company IDs