For some reason, and even among those of us who snoozed during history class, we know – almost intuitively – to avoid, avert and stay very far away from anything to do with ‘isms.’ There’s an almost primitive gut feeling that kicks in and tries to alert us to the fact that most isms are, well, bad for you.

Nope, this isn’t about the usual suspects; capitalism, communism, fascism or even etceteraism. Instead, it is about another  ism, and I guess you can label it an organism. That’s because it’s growing, like a rampant infection, without apology,  appearing all over the workplace. Its name? NEPOTISM. 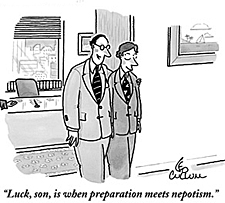 By far one of the ugliest, most frustrating and morale-destroying of the isms. Worse yet, it’s one that almost all of us have been subjected to, and suffered from. The long-held corporate party line, that "we operate strictly on merit here," has never been further from the truth than today. Stuff like ‘fair play,’ ‘the cream always rises,’ ‘you get what you deserve,’ etc. are now nothing more than a gaggle of antiquated euphemisms (uh oh – another ism) designed to make sure that you blindly soldier on.

That raise you were entitled to and were expecting for a long time? Forget about it; it went instead to the boss’ semi-retarded nephew. You can only now hope that he’ll just sit quietly in his large office (no cubicles for him), play with his office supplies, and leave the real work to real people. The promotion you thought you were promised? Nah, it went to the company’s’ new rising star – the chairman’s daughter. So what if she’s only been there for three months as compared to your three years. And, just to compound the felony, she now supervises you! Ah yes, a nice double dip; nepotism combined with affirmative action.

But hey, let’s not be bitter about the whole thing. After all, and like the Hollywood glitteratti, all nepotism types (sons, daughters, in-laws and other relatives of all sorts and stripes) chant the same, tired mantra: "I did it on my own…I got no help…in fact, being a (Kennedy, Rockefeller, Trump) only made it harder for me. Why, I even had to live in my car to try and make ends meet." Blah blah blah.

And yet we believe this crap.

So, and as you can see, we really have quite a long and nasty history of nepotism. I suppose every culture does…but what’s really disgusting is the fact that corporate America still tries to sell you on the merit myth. Government is, to no ones surprise, even worse. Think about it – the U.S. Senate is constipated with the sons and daughters of retired or dead congressmen, Mayors are succeeded by their wives, and the gene pool is getting smaller by the day. The New York Times, once considered as the newspaper of record, is being run by the fourth or fifth generation of the same blue blood family. Inbreeding can be the only explanation for what’s happened there. Even nationally, when did we become a monarchy? Bush-Clinton-Bush-Clinton.

Who knows, maybe soon we can look forward to being ordered to wear casual Friday shirts that sport family coats of arms instead of corporate logos. That, at least, would be a touch more honest than having to continue living the merit myth. Oh, and before I forget; there is one ism that will help you get through the day, and that’s individualism. And, as the old song says ‘no no, they can’t take that way from me…’