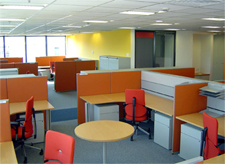 Under the guise of wanting to increase ‘transparency,’ the new organizational trendsetters are touting the benefits of the horizontal work space…that is, the cubicle and (worse yet) the bullpen. So, and from the lowest clerk to the highest CEO, everyone is now expected to march in lock step and function in an open, and thoroughly non-private environment. These theorists would have us believe that the loss of privacy and the increase in noise is indeed a very small price to pay for this more democratic environment. Yes, we’ll not only increase productivity, but we can also foster diversity, eliminate class distinctions, etc. ad nauseam. Of course, most of the folks promoting this stuff have never really worked for a living, but why should that get in the way of anything…

Sure, this system is way more egalitarian than the old hierarchy was.  And if you’re still not convinced, just ask rank and file workers how much they enjoy the heightened visibility and lack of privacy that the bullpen provides them with. What, you mean they’re not on salary par with their bosses? Couple this with executive omnipresence, and, well, they had just better behave and enjoy their Kool-Aid. From corporate America, at Apple and IBM, to college campuses and various governmental facilities, the bullpen especially has taken on almost iconic proportions.  Yet, and despite all these praises, there is absolutely nothing of substance to show how the bullpen concept has done anything good for anyone.

If you think about it, it’s really ironic that the desire for some private space, a little corner of the corporate world that you can call your own, is now considered at best a guilty pleasure. You say that you want to be creative, that you like being alone at least part of the time? Uh oh, you’re defying the new collective wisdom and you may well be branded (oh my god) an individual!

There was indeed a time when the private office stood for something. Sure, it was always a symbol of authority, but it was also a perk that you could aspire to. A place to think, to plan, to feel like a someone in an anonymous world. Instead, and if you’re lucky, you too can sit literally feet away from your bosses; because after all, sharing is caring, right?

Don’t be fooled; this new approach is nothing more than the organizations’ way of reinforcing the simple fact that you are indeed just another small cog in a very big wheel, no matter what Newspeak says.