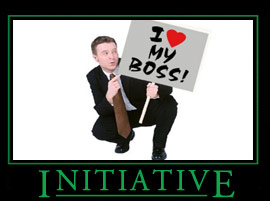 Today we’re lucky to have a guest blog entry from Lance of YourHRGuy.com.  Lance’s blog is excellent – giving some great insight into to the HR profession while not ignoring the needs/demands of the common worker.  Take it away Lance…

Andrew talked about when to turn down a promotion and I am going to talk about when that is the worst thing you can do.

Promotions are usually seen as a positive, but as Andrew pointed out, promotions can also be a bad thing.  So given this extensive list of when not to take a promotion, when can you not ignore or reject a promotion opportunity? Let’s find out:

1) It’s a win/win. Sometimes we find the perfect situation. You’re going to have a great boss, the people working for you are amazing, the job fits right in line with your career path and of course, there are big bucks involved.  Some idiot in the back of your head is trying to tell you that something isn’t right.  Ignore him. He is an idiot after all and if you see this opportunity, you cannot pass it up.

2) You’re young (or you’re old). If you are like many sub-30 year olds, you are single and have relatively few strings holding you in one place. That means that if you are living in Boston and that dream job and/or promotion is in Dallas, the only thing you have to consider is how much you hate heat and humidity.  Similarly, if you have just happily emptied your nest, you’ve probably feigned promotions outside of your area for at least the past 20 years. Both are ideal times to take that new promotion.

3) It is a new line of business for your company. If your company is trying a new market out and they want you to run it, you should jump for it.  Not because it is easy (because it isn’t) and not because it pays the most (because it usually doesn’t).  You take it because the promotion is almost all upside. If you make new gains in that experimental market and show yourself to be the least bit competent in doing your job, this can be a wide open door to choose your schedule and compensation in a couple years.  Worst case scenario is that you try your hardest but the market blows and you are seen as a tireless worker until they happily pull the cord on your program but figure out a better place to be at the company. There will be some people doubt this but I haven’t seen this go wrong unless the guy is a slacker.  You aren’t a slacker are you?

4) The promotion will excite your passions. Let’s say you’ve been working the last few years and you feel bored with it all and uninspired. That same feeling you got when you woke up every day excited to jump on a bus, then the train, then a cab to work for insertyourdreamjob.com here.  Then a promotion comes your way and you become excited and start thinking about all the new things you are going to start on. You know what I mean? If you do, take that job.  Even with minimal pay increases, I have found it to be incredibly rewarding to reignite that flame of passion. I think I got that from a romance novel…

5) The person you are replacing was just promoted and will be your boss. It seems silly, especially from the HR perspective, to talk about the inherent bias that a boss has for his or her former position. If the person is hiring the replacement and the chemistry is there, go for it. Almost all the bosses I’ve known have a special place in their heart for their former position and the person they placed in there.  The only caveat I’ll add here is that you know the boss is going to be good.  After all, attaching yourself to a bad boss is one great reason to avoid the promotion.

6) The pay is too good to pass up. There comes a point in our professional career when we can be bought into a bad situation for the right price.  A 5k price tag might not do it but a bigger one might.  And when you talk of the possibility of buying a house or reaching a major savings goal, nothing can get you there faster than a shot in the arm of the green stuff from work for taking on an impossible task or impossible people.

Which isn’t to say that there aren’t bad situations in all of these that might make these unrealistic for your situation. Largely though, these are the reasons that I don’t think you can refuse.