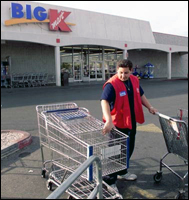 Bosses at my first job referred to me as Clock #26 and required me to wear a red vest. Yes, friends, $6.05 an hour at Kmart was where I received my inaugural paycheck. Don’t laugh, I learned a lot! In fact, I attribute portions of that job – even though it was about 15 years ago – for getting me into podcasting.

I started innocently enough by collecting carts, ringing registers, and stocking the shelves. I don’t know if it was the way I scanned or the way I bagged, but I was quickly moved up to the big time: Register Supervisor. Now, when someone ran out of quarters or needed a 15-minute break, they came to me, Clock #26, keeper of the keys and master of your bladder.

Now you’re probably wondering – what the heck does this have to do with podcasting? See, a register supervisor was allowed to play God in one other way – he or she had control over the store intercom. A long-necked, flexible microphone with a black button that only I could press. And when I did, my voice echoed throughout the store.

“Clock 88, please return to your register.”
“Maintenance to aisle seven for a wet spill.”
“The store will be closing in 15 minutes…”

Then there were the Blue Light Specials. These were my invitation to be obnoxious; an area where I could flex my “creativity” and alert shoppers about specific, limited-time-only specials–killing the Kmart Radio Network in its tracks.

“Attention K-mart shoppers. We are currently having a Blue Light Special on… DORITOS! Cool Ranch and original Nacho. Two bags $4. It’s a deal that can’t be beaten and it’s only at K-Mart.”

Maybe in text, it reads innocently enough, but click play on the audio player below for an idea of what it sounded like.

I milked it for everything it was worth. Under the fluorescent lights at 17 years old, there was little to get excited about. Cute new hires and the store PA – that’s it.

With each passing day, I became more embolden, relishing the power of the mic. My announcements became longer, more detailed, and probably a little, well, strange.

Eventually, clock number 404 put me in my place. (Clock numbers in the 400s were reserved for management.)

Bastards. Ruining all my fun!

Not too long after, the following sequence of events led to the end of my KMart career:

1) A customer fought with me about returning an open box of tampons. Oh, and she brought a used one to support her case for a lack of ‘absorption.’

2) A customer threatened to choke me with my own ponytail when I wouldn’t reduce the price of baby formula since the can was dented. (ah, my rebellious, long-haired days)

3) I graduated high school and was moving on to college.

This was more than I needed to hang up my ring of keys and retire my red vest for all of eternity. Needless to say, they did not retire Clock #26.

That K-Mart store has since shuttered its doors, but I’ll always be grateful for the things I learned at my first job. From this point on I knew that I would always be a motivated employee who’d take pride in everything he did. Yes, even if it was stacking a pallet of mustard, interviewing Oliver North, recording Rufus Wainwright, letting an employee down gently, or recording the Working Podcast or writing the Jobacle blog. On a certain level, all tasks are equal and deserve to be treated as such.

That first job proved to me how capable I was. This was helped along by managers putting trust in me at an early age. When I work with younger folks, I try to keep this in mind and am unafraid to make the leash a bit longer than it ought to be until proven otherwise.

I also learned I liked making obnoxious announcements. And I’m proudly doing it to this very day. Take that Clock #404!

ADDENDUM: In one of those beautifully random twists that rattle your cage, I was actually e-mailed by my first K-Mart boss, Scott G. The ironic thing is that he contacted me the night after I wrote this post but BEFORE it was ever posted. So freaky!