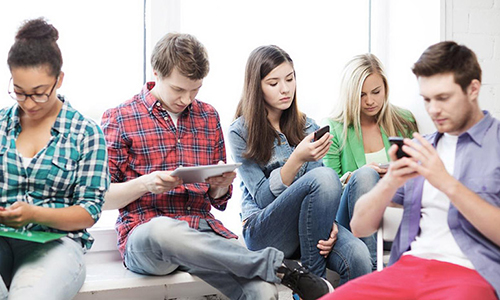 What is Generation Z, you may ask? Good question. Just know that the answer is still way up in the air. It is an enigma, wrapped in a puzzle, launched on an app, seen on an Apple Watch and eventually will be livestreamed directly into an Oculus Rift. Is that enough buzzwords for you?

Well, the modern office is going to be looking at you, Generation Z members, to make sense of all these concepts and integrate them smoothly into our economy. Basically, if you were born from the late 90s , you could be looking at membership in Generation Z. Late Millenialish, but the constant immersion into online life and the explosion of tech since your birth means that you have very little experience with the analog world that used to exist.

What can you expect from the workplace? Oh, nothin’ much, just all your bosses and their bosses looking to you for salvation. Someone needs to come up with the innovations that will make the Internet of Things work, create new streams of revenue that rival what old media had on lockdown for decades and figure out the new legal and ethical framework that our new working world needs to exist in.

The tech sector talks a lot about disruption. Your very presence in the workforce is going to be disruptive. No one knows how, at this point, because you haven’t been around enough to be a coherent, actionable demographic, marketing-wise. Which means that you can pave your own disruption. Learn from the mistakes of the millennials. Do what you can to seem accommodating, not entitled. Understand that, as fast as it seems like things are changing, there are still powerful forces keeping status quo barriers in place.

But you still need to be developing your skills at a faster pace than ever before. Nearly every job worth having is going to require computer literacy, if not outright programming skills. Studying up on computer science is smart, even if you don’t want to be a coder. Getting into the minds of those that build the tools you use every day will help you in the long run.

What you will be facing in the workforce (that your parents and older siblings did not experience) is the lack of privacy. And the dominance of so-called “progressive” values. Now, I don’t want to get into a political gabfest here, but here is my basic argument: Companies used to be super conservative places. But they are all starting to loosen up quite a bit. Internet policies are being stretched, because so many need open collaboration and cloud access to do their jobs.

Social media is a major form of communication these days. And that means that transparency is important to companies. Even if they don’t know. Growing up as users of social media, you have a digital-native advantage that many of the olds who will employ you don’t have.You have chance to be instrumental in setting the conversation around how your companies will interact with users. Many companies, even if they were not publishing or editorial organizations, were essentially gatekeepers. Information was their power.

No, a harmful tweet can be circulated hundreds of times before a customer service rep has time to deal with it. Sometimes that can be very damaging to a brand. Sometimes a brand is big enough that carping on social media won’t really affect it all that much.

But the point is that you, the Generation Z member, is in a unique position to be able to navigate through these thorny modern problems. Social media is here to stay and the fact that you practically came out of the womb posting on Twitter, Facebook and Snapchat means that you will be able to wield influence within your workplace a little quicker than others who came before you.

The American Dream is dead. You know, the one that has you at one company for your whole career, living in the same house for 30 years and getting that pension/golden pocketwatch at the end of it all. No, like really dead. I know they said that years ago, but it is true now more than ever.

The skinny on you, Generation Z members, is that you are focused on finding your dream job, where the satisfactions and pleasures of being in that position overwhelm all your senses. One piece of advice: Don’t let that get to your head. Fight for what you are worth.

At first it won’t be much. Every company is going to want to get more out of you for less money, so do your best to be valuable enough to be compensated properly. It won’t be easy. You might have to go work for yourself.

All in all, you have the world at your fingertips. Literally. It has never been easier, or cheaper, to access any amount of information you want, take any class you want or travel to wherever you want. Take advantage. Just don’t mess it up.