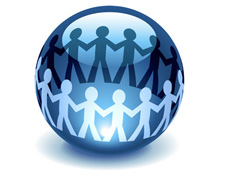 If you’re looking for a social media job, or want to break in with a major company, this list will tip you off on whose attention to try to get via the Web.

Notable results include Microsoft trouncing Apple, Coca-Cola sitting flat at the bottom of the list, and GAP stitching their way up the list to hang with the tech big boys.

Not surprisingly, social network membership among employees of the largest companies in the U.S. is highest on LinkedIn (43%).  Facebook comes in with 11% and the other social networks fall off precipitously after that.

Get the full results.