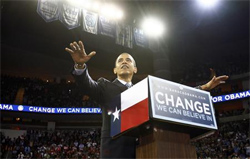 As the late, great Lee Marvin tells his Dirty Dozen, ‘there is no escape, there is no appeal.’ And so it goes for all of us, as we’re constantly bombarded with the political bluster and bombast that yet another presidential primary season brings. Thanks to media super-saturation, be it on the blogosphere, in print or on the tube, they all provide the same inanities, day after tiresome day. We now see and hear these three potential candidates running between venues, imploring, pleading, demanding and sometimes even whining, doing almost everything they can in order to get our support. And all on our uncomplaining dime, no less.

One can almost feel sorry for these three, ’cause, and whether you support one or the other, or none of the above, they all are in fact working their very rich and well-funded asses off. I mean, how would you like travelling from one boring place to another, glad-handing, and even pretending to sympathize with, the vast array of plebes out there? Yet, and in some almost bizarre way, the primaries resemble nothing more than one big job interview, with the candidates as applicants, and we, The American People, as the ultimate decision-makers.

Yes, the job interview…an experience that we can all readily relate to. We recall, I’m sure, suffering from the sleepless night-before-the-interview syndrome, the over-preparation, the anxiety about arriving late. Plagued by a million ‘what-ifs’, even as we march, or shamble, or stumble into the interview, as if we were attending our own execution.

Though the interview process can be uncomfortable, and to some demeaning, it is nonetheless the way, the rite of passage, if you will, by which we get to strut our stuff. Because, if we weren’t aspiring to whatever is being offered, we wouldn’t subject ourselves to the whole sordid business to begin with. If we do advance up the food chain, we too can expect to eventually sit in the big chair, clinically dissecting some scared supplicant, and determining his future.

Sure, the candidates all have their handlers, consultants, advisors and an almost endless army  of ass kissers and a coterie of careerists who follow in their wake, obediently drinking Kool-Aid. And, though the stakes may be higher, have no illusions. After all of the speeches, the interviews, the pontificating alternating with faux humility, the sad pretenses of spontaneity, have finally passed, ‘we the people’ get to decide. We get to vote on who among this stellar group did so well on the long and protracted job interview that is the primary season, as to  get
The Job. Winners and losers, isn’t that what it’s really all about?

I don’t know about you, but I’ve never, ever met a boss who didn’t think that he/she was the greatest interviewer, the best judge of human character; had the keenest insights into human nature; who knew how to tell the liar from the lame, or the lazy, for that matter. You know the type, a veritable legend in his/her own mind. And it would be a real pity, especially now, if we also practiced the fine art of self-delusion. Caveat emptor-buyer beware!