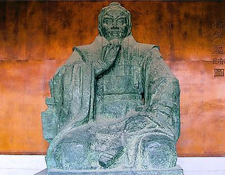 Though I now work in a great office at Airsplat, the nation’s largest retailer of Airsoft guns, it took a strategic search to find this position and I am often dismayed at the struggles of my friends who are on the hunt. Seeing their constant disdain, I reflected on the primary differences between my search and theirs and came to the realization that I instinctively approached the process using war tactics. I have a favorite book, The Art of War in which Sun Tzu said “If you know the enemy and know yourself, your victory will not stand in doubt” and my strategy was relying on this concept. I know you are probably thinking that the employer is not the enemy and you are right – but unemployment is!

The reality is that if you face unemployment as an enemy to be vanquished, then employers are your allies and you must strategically create those alliances. I teach some military training courses with airsoft on weekends as a side gig. Recently I decided to hold an airsoft seminar that teaches how to use the same skills and mindset to get a job. I told them from the beginning to go out there and give it their all, without regard for winning or losing. After a long day of shooting at each other, I spent some time discussing how if they approached their job search with the same uninhibited mindset they had earlier, they would “kill” unemployment. It was well received, and I’ve heard back from a few clients who told me they were able to get more interviews because they weren’t afraid of attacking their problem.

“Invincibility lies in the defense; the possibility of victory in the attack.”

In airsoft, a strong well defended base means you don’t have to worry about being ambushed, which allows you to focus on offense. In terms of job seeking, the best defense is improving your image. These days that not only means dressing up for an interview, but cleaning up your online image. You should either take down or limit access (only friends or family can see) to your online photos on Facebook or other media sites, as that’s a viable way employers can research you before or after a job interview. Make yourself unassailable in all aspects, because even though you may have a stellar resume, if you’re holding too many red plastic cups in your photos, employers might not be as willing to hire.

“Strategy without tactics is the slowest route to victory. Tactics without strategy is the noise before defeat.”

You’ve written out a resume and you have a set of jobs lined that you are ready to apply for. That’s the strategy. However, it does not possess the proper tactics necessary to improve your chances. In Airsoft you can’t use the same airsoft gun for every single situation. You can’t tag someone out 200 feet away with a pistol, you need a rifle. In the same way, using the same generic resume again and again, will make employers think you are also ‘generic.’ If you have the body of your resume, you can simply tweak your approach tactic to the type of job or company in question. It may seem like a pain when you’re doing it 20 times a week, but think about it as strategic use of your ammunition. You don’t want to fire and miss.

For my interview with Airsplat, where I work now, I came clean shaven, wearing a button down shirt with a military style jacket. I also brought a few of my many custom made airsoft guns built over the course of a decade. I wanted to show that I had extensive knowledge of their inner workings. I also talked about the knowledge of real firearms from my time in the military. I ‘showed’ rather than ‘told’ my interviewer it made sense to hire me. I was prepared and when I entered the “battlefield” I brought only the useful skills and equipment with me.

The keyword is preparation. You don’t go into battle – airsoft or real – without the right gear and foreknowledge. You plan on what to bring, you have a map of the area and its features and advantages. In a job hunt, you dress appropriately for the situation, (ie, jeans aren’t appropriate for an office job in DC just the same as a suit and tie doesn’t make sense for a construction job or more casual environment). You also want to research the company you’re applying for, so you have questions prepared to ask them about their progress, growth, and so you are able to answer how you would be a valuable addition.

I leave you, the reader with one last quote from Sun Tzu, “Can you imagine what I would do if I could do all I can?”

John Durfee is a Gulf War veteran and the marketing manager for Airsplat, the nation’s largest retailer of Airsoft Guns and Mini Electric Airsoft Guns.