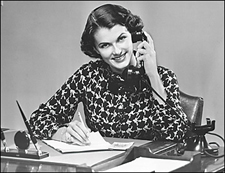 As part of an annual ritual, I usually amble into Staples at this time of the year to buy next years’ appointment book. If you read my last column, you know that I do everything possible to avoid, avert and evade the holiday hustlers who patrol the entrances of drug stores, mega-stores and everything in between.

Once in the store, I’m surprised to find that these appointment books are in very short supply, since almost the entire store is dedicated – no, devoted to –  all sorts of techno stuff. It’s almost like paper is going out of style. Call me old school, but for me there’s nothing like a clean, fresh, high-quality genuine leather appointment book. It’s almost mystical, scanning the blank calendar pages, and knowing that they’ll soon enough be filled with all sorts of meetings, conferences, and the like. Some challenges will be new and some old.  Every page awaits its future. These great little books used to be called, well before the blackberry revolution, ‘pocket secretaries’. Sadly, and sooner rather than later, this little leather book will soon be consigned to the dustbin of history, a relic only to perhaps be found in a lesser museum.

Hopefully, and for all our sakes, the office secretary will not suffer the same undeserved fate.  Modern thinking to the contrary, the secretary cannot be replaced. Not by any type of nameless, faceless, technological advance or humanoid software package. Because in addition to every other task that still needs to be performed at the office, there is no one, no one who will consistently and faithfully watch your back better and more zealously than your secretary.  Assuming that you treat him or her right.

True enough, the secretary’s role has changed, and changed dramatically, over the past several years. Stenography, touch typing, opening mail, filing, taking phone messages and copying copious amounts of documents are now pretty much antiquated functions. Typed letters? Paper documents and files? Human contact? Who really needs them anyway, the modernists argue. Why, they continue, it’s all in the ether. And so the office environment is now amorphous, intangible and floating not so gently in cyberspace. Busy execs sit hunched over their monitors, clicking quietly away at their keyboards.

Yet, for the almost three and a half million secretaries in America, there are still important and significant needs that they fulfill, every day. According to the Princeton Review, secretaries still do what they do best, and to manage information. When you consider the many new and complex skill sets that they’ve had to acquire over the past 10 or so years, just trying to keep pace with a rapidly changing techno environment, it’s very much to the secretary’s credit that they have been able to so successfully and smartly adapt to the ‘new world.’ While typewriters have been replaced by word processing programs and rulers by spreadsheets, the bottom line is that it’s the secretary that really pulls it all together for you.

Too often, younger execs are so busy and self-absorbed that they fail to appreciate or even respect the real and important tasks that the secretary performs for them, in a quiet and unassuming way. In the end, it really is all about people.  Despite rumors to the contrary, all business is, in reality, personal. And that’s why you really need to take the time to appreciate the professionalism and loyalty of your secretary. It’s something that you’ll eventually find out is a value that even money can’t buy.