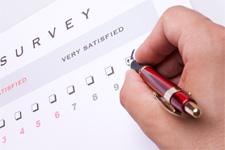 Recently, two people who work in very different industries discussed their performance reviews with me. Both reviews were in a similar format, but one used a one through five rating scale with five being “walks on water” and one being “get that resume updated.” The other review used the one through five scale in reverse order with one being the seldom-awarded highest score. Huh?

Andrew offered an astute take on performance reviews with “6 Reasons Staff Evaluations Fail.” The majority of folks I know, whether management is doing the review or employee receiving it, seem to loathe the process.

So, with psych persona on, I decided to examine what makes it such a repugnant experience.

1. Somebody who hates you will get to harpoon you – Used to be, your boss wrote your review, you agreed or not and signed it. Now, everyone from the reception temp. to a VP gets to give their two cents in a peer or colleague review section. What a great opp. for the person who dislikes you to damn you with faint praise or worse – send career-ending salvos your way.

2. The language is deliberately obscure – (Check out “Biz Buzzword Multiple Choice Quiz”) I swear a review I read had the following sentence; “Bob seems to bring a loosely-defined paradigm and synergy-production ethic to the team’s overall distribution enterprise.” Okay, is that bad or good? Hopefully, Bob speaks Corporate and can translate. But why make a simple performance objective like …”is a team player” so complicated? Is it to throw the employee off balance?

3. Less is more – You know that if that review form is longer than four pages, your boss was really pissed by the time he has to fill out page six. I bet if it was a two-pager, your boss would associate you with a pleasant task and give you a more favorable score.And buy you a beer.

4. You will never shake off a bad review – When a former employer of mine, a big insurance company that I fondly call “The Evil Empire,” began to deny behavioral healthcare to deserving subscribers, I made the mistake of questioning the higher-up’s methods. Next thing I knew, I was pulled into a meeting with my boss and an HR person and told they wanted to address my “negativity.” So for six months, I was to regularly report to the boss with my progress on the broad objective of “being less negative.” I was branded a bad seed and realized it was time to move on.

5. There will always be a nagging doubt – Even if your review or the comments you are writing about a colleague are mostly positive, the one zinger will stand out. It can be a real self-esteem bomb, especially for those not feeling secure in their position.