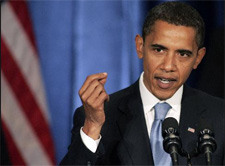 CNNMoney.com says that President Obama plans to hold a job forum at the White House in December to brainstorm about job creation. Those invited to the forum will include CEOs, small business owners, economists, financial experts, and representatives from labor and non-profits. (Jobacle is patiently  awaiting our invite). The president is facing a 10.2% unemployment rate but says there have been encouraging signs of economic growth and a slowing of the loss of jobs in recent months, but also said employers are still reluctant to hire and millions are desperate to find work.

Some economists have been arguing for another round of stimulus to ward off sliding into another recession. Not everyone is convinced. And politically, the prospects for passing a single stimulus package with a big price tag are not high. Instead the administration and Congress are looking for smaller initiatives that can be taken both by the government and the private sector.

One idea that has been floated to spur job creation is a hiring credit, whereby employers would get a tax break for every new worker hired. But many say it’s a flawed concept since it would end up disproportionately rewarding employers that were planning to hire anyway.

So far lawmakers have extended and expanded some measures from the original $787 billion stimulus package passed in February -specifically, federal unemployment benefits, the homebuyer credit, and the big tax break for businesses looking to write off more of their losses.