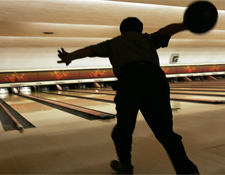 Recently, Andrew G.R. took a walk down memory lane with his blog: Working at K-Mart Taught Me How to Work. I thought it was nice to read about what my friend had learned at his first part-time job – and it got me thinking about my first jobs. I had several as a teenager, and while I’m sure I took something away from all those positions,  my fondest memory- or at least the one that is the most interesting to tell- was the one that took something away from me… a fraction of my left index finger to be exact.

It was a Thursday in November of 1993. I was 16 years old and worked maintenance (for lack of a better description) at the local bowling alley. The job consisted of a few main tasks;  Oiling the lanes; sweeping the gutters and approach before league bowling started at 4pm; wiping down the tables and keeping them free of beer bottles, overflowing ashtrays, and plates of cold French fries, etc.

For a short time, before the mechanic showed up, I was also in charge of keeping the machines running. Yes, this job probably broke all sorts of child labor laws but I wasn’t complaining. I liked the grittiness of it all. That is until The Day.

Thursday afternoons belonged to the senior’s league. They were into their games by the time I arrived.  The joint had 18 lanes to maintain and usually those days were pretty quiet. Most of the seniors had quit smoking and the only thing they really drank was coffee. It was never rowdy like the drunks from all the job leagues.

But it was also never exciting. Maybe this was why I decided to liven things up for the old timers that day.

I was making the usual rounds wiping up the tables when the call came over the intercom: “Eric, we need a ball return on 13”. Since the actual mechanic (Mauricio) wasn’t due to arrive for another two hours it was show time for me.

There isn’t too much that can go wrong in the back of a bowling alley. Basically it is a mechanism driven by a chassis and is nothing more than a series of small pulleys that work to control bigger pulleys. There is also a huge drum that spins and drops the pins one at a time onto a small conveyer belt. That belt moves over the carriage and drops the pins into their proper place. If any one of those functions breaks down the timing is thrown and it causes the whole system to back up.  If you’re lucky, there is a pin blocking the small hole that your ball rolls into, which is then grabbed by a huge pulley that drops it down the chute and back to you. This can be done from ground level right behind the machine. If not, you have to climb up about six rungs and work on a plank above the machine. There is very little space to maneuver and things become far trickier.

To this day I still don’t know what was wrong with the damn machine. I just know that the biggest pulley responsible for returning one’s ball had stopped spinning – despite the fact that the three smaller pulleys that control it were spinning away. Standing up on that plank I investigated the chassis. Without even noticing how close my hand was, I was suddenly yanked: my left hand snatched up by one of the smaller pulleys. My hand was pinched between the belt and the wheel and maybe I would have been okay if I had just gone the complete turn, but as a natural reaction, I yanked my hand out of the machine literally ripping the tip of my finger off.

Standing there, I didn’t know what to think. My brain hadn’t even sent the signal that I was now in agony. I looked down and saw that I was not a whole man anymore.

Just like a horror movie, I jumped off the plank, blood shooting out of my hand and on the adjacent wall (pity the poor bastard that had to clean this mess). I ran as fast as I could towards the exit stopping to wrap my finger as tight as I could.

This was my second mistake.

The bowling alley had stocked that single brown roll of sandpaper-style paper towels. The kind that you find in public school bathrooms that still has pieces of wood in it. With my nerve exposed this great idea shot a pain up my arm that made me see blinding light. I ripped off the paper towel as fast as I put it on and I proceeded to run to the front of the alley, past all the seniors – spraying blood all over the pastel colored lockers. I could only imagine these people’s faces as they tried to make sense of what they were watching.

I quickly ran into the snack bar, simply because it was the closest area to where I was, and good ol’ Annie (an old woman that probably took the job as a quiet way to spend her days serving up smiles along with one of the best damn burgers I’ve ever had) would make sure I was taken care of.

I threw my hand into the aluminum sink and made the decision to just let the blood run out of my body until the ambulance came. Now, until this point I hadn’t even muttered “ouch.”  I just kept breathing heavy and squeezing my eyes as tight as I could. With seniors gathering and Annie yelling for help I could no longer keep it all in. I had to let something out if I was going to cope with this level of pain. With my head on the edge of the sink and my hand draining out I stomped my bloodied work boot as hard as I could on the floor three times, and on the third stamp I let it out. I howled the nastiest obscenity as hard as I could through teeth clinched so hard I thought they would shatter in my mouth. I went for the big gun, a long guttural, straight from the belly F bomb.

After that things began to go fuzzy. I knelt. All I wanted to do was lay dawn. My finger began to throb. Before I knew it an EMT was wheeling me out on a stretcher. I was a bloody mess. I never returned to the job. Not because I became afraid of bowling alleys, but simply because with my hand wrapped and my arm in a sling to keep it above my heart rendered me useless for the tasks one must do in that position. I received a great workers comp check that I probably blew on cigarettes and CDs (two things I have given up since) and even though many people told me I should’ve looked into suing either the bowling alley for negligence or the company that designed the machines that left its pulleys completely exposed – I decided not to. Not a popular decision during those sue-happy times, but I knew what I was doing.

Well, I didn’t, but I took responsibility for the fact that I decided to show up every afternoon.

So that’s my story. At least that’s the only one probably worth sharing. Now we want to hear from you. What was your first job? Do you have any stories from the trenches? Everyone started somewhere. Tell us about it.