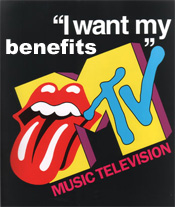 Viacom has made headlines recently with regards to their “permalance” system. For those of you not familiar with the term permalance, it’s used to describe an employee that falls somewhere between a permanent/staff employee and a freelancer.

There was a time not too long ago when I worked for MTV and was placed – as an estimated 75% of their employees are – in the permalance category. What this meant was that you held a full-time position (you know, a 50-60 hour work week) but received no benefits.  Try explaining that one to mom!

Freelancers can often charge more for their services since they are not a "drain" on an organization’s payroll.  While a certain level of stability comes along with freelancing, many find it more rewarding to be their own boss and not get stuck in the grind of a daily routine.

Permalancers have no such freedom. They are paid the same as regular staff employees, leaving them with the burden of buying their own health coverage or foregoing coverage altogether. Plus, they are expected to keep normal hours and do consistent work, just like any ol’ full-time job.

With no shot at overtime, and healthcare costing what it does, people are left in a predicament: Avoid getting sick or die trying.  My understanding is that many MTV departments do not even get vacation or sick time.  During my stint, I was told that my bosses “fought” to have that perk instated and that “we were lucky” for it.

It is unfortunate that a company as politically active as MTVN could lend heavy support to politicians that believe in free healthcare for all U.S. citizens, yet don’t offer it to the very employees that make their business tick.

One would only have to gather a small percentage of their internal e-mails and memos supporting such causes to shine a light on the amount of hypocrisy and greed that keeps the corporation as wealthy as it is.

So why would anyone in their right mind sign up for something so ridiculous? Well, I can only speak for myself, and in my case it was a pay increase from where I was.  And the healthcare issue was moot since I was covered under my wife’s plan.  The reality is, there will always be someone who wants to work for MTV, regardless of the pay, regardless of the benefits.

From time to time someone would raise the issue of wanting to become full-fledged staff members to which there would be no real response. The most one could expect in response was something along the lines of, ‘well, that’s just not gonna happen.’

I wish I could sit here and write how I was one of many that led a crusade to the folks in charge and insisted on a better system, but I cannot. I put in my time and moved on knowing the system was flawed.

Fortunately there is now a group of young upstarts that are not going to take it anymore. First there was an organized t-shirt protest that took place at the holiday bash.  Then there was a walk out.

It isn’t too surprising that since this pressure has become public MTVN has shortened the time it takes for a permalancer to receive health coverage and they have also reinstated a 401k package.  Time will tell, however, if the changes are enough to placate the masses or if the walkouts land people on unemployment lines. Oh wait, that benefit is only for staff employees.