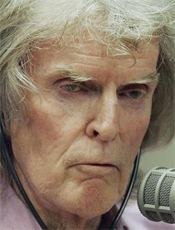 Just eight months after being fired for using racist and offensive remarks on his program, radio host Don Imus is back on the air. He’s on a new station (WABC 770 AM), with two new cohorts, but promises that the show won’t change.

For the most part things are going well for Imus. His audience nearly doubled on his first show back with its heaviest numbers coming in the first hour. Clearly there was a curiosity that will (and has already) tapered off, but he’ll still have great numbers. He seems to be remorseful and has already settled back in to doing his job.

I, for one, have never listened to Imus. I have had two Imus experiences though. The first came when I was working at a private airport in New Jersey. It was Labor Day and he was returning home with his wife and child from his Ranch for Kids with Cancer. I unloaded his luggage and he gave me a $20 tip – a great tip. The second came only a few months later when I was working at CBS and my first task was to remove the commercials from recordings of his shows.

My personal take on the controversy is that I think the punishment fit the crime. He certainly deserves to earn a living and we can decide to listen or not. It is amusing to me that some of the people that were calling for his firing feel exactly as I do; this includes the Rev. Al Sharpton. Maybe they should have just called for a suspension and an apology.

I was never too interested in the controversy. I certainly felt his comments were inappropriate, but after that I tuned out. I can’t help but wonder though, if you or I were fired from our jobs for racist slander, do you think we would have rebounded so quickly?

My first thought is no. For starters there is a good chance that you would have to go find a job immediately. That might not be so bad except for when you have to explain in an interview why you are able to start immediately and can offer no references from your previous employer. We would also have to search without the benefit of millions of dollars in our bank accounts (I’m assuming).

On the other hand we are not public figures. In our case the matter would not be handled publicly. If you are fortunate enough to land an interview quickly while hanging on to a reference or two there is always the chance of bouncing back with no one ever really hearing of the incident. One things for sure, you wouldn’t wind up in negotiations with contract promises just as soon as things cooled down.