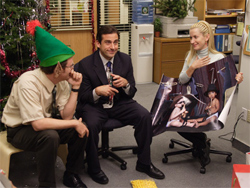 You know it’s almost here; that time of year for the ubiquitous holiday work party/ritual. It started last month with the orange and black cupcakes in the break room and will continue into January. Most companies have wisely jettisoned the office party with booze – too many scary liability concerns. But there will still be potlucks and other festivities. How can you avoid them without looking or feeling bad?

My husband mentioned that he’d like to avoid, er, politely decline the December gift exchange this year. His department draws names – kind of grade school-level, I think, complete with the person’s “Santa” list. I should say he is an excellent, thoughtful gift giver and actually has a shopping gene (I worked in retail and can’t fathom it myself), so it’s not a stereotypical guy thing. His colleague said she felt the same way and might suggest the department just go out to lunch instead. Great idea!

Some people are able to abstain due to religious or other belief systems and no one will argue with that. But what if your co-worker’s partner has been laid off for months and money is tight? Putting them in a position of feeling like they have to contribute isn’t very fair. What if your admin. assistant was five kids under ten and can’t fathom having the time to make something for yet another potluck?

So, how can you get out of participating? Here are some statements/responses to try. Perceived peer pressure is tough! Practice them until you become comfortable.

* “I’m sorry, but I’m not going to be able to participate in the gift exchange this year.” Don’t feel you have to elaborate.

* “What if we skip the usual potluck this year and go out for a nice lunch instead? We don’t get out of here often enough.”

* “I’ll be taking some vacation time this year. Sorry, I won’t be here.”

Another option is talking privately with your boss. You want to avoid not appearing to be a team player, so be armed with some viable, alternative ideas. It helps if you have at least one like-minded co-worker who can take on the cause with you.

Related: 7 Reasons Your Company Wants to Cancel the Holiday Party