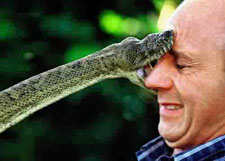 Snake bit: To be cursed, extremely unlucky or destined to fail at anything you try.

Fear of snakes has always haunted mankind, and for at least some of us, it’s too creepy a subject to even think about. After all, it’s a phobia that we’ve carried with us, ever since we left the primeval ooze – and remains with us – even into the age of the cubicle.

I don’t know if you’ve ever heard the expression ‘snake bit’, but it’s one of those primo descriptives that says a helluva lot, leanly and cleanly. The term refers to some poor sap (hey, it could well be you or me) who suffers from a virtual cascade of bad luck. Knowing no racial, gender, age, religious or other boundaries, real bad luck is, well, an equal opportunity inflictor. And it can slither into our lives and bite us.  Despite our best efforts, we think that we can’t shake it off.

Sure, it can start slowly, like a guy cutting himself shaving, and the damned bleeding won’t stop, even hours later. And it continues, even when the bleeder has to make a major presentation in the corporate board room later that morning. But it gets better-or worse-as our now seemingly perennial victim continue to be slugged by lifes’ misfortunes. Uh oh, that grinding noise you ignored when starting your car finally stopped, but so did your car, as it stalled out on the highway. Just found out that your neighbor in the cube next door recently got a 10k raise? Learned that you were one of the very few not invited out for drinks on a Friday night?

Okay, let’s back up. ‘Cause when it comes to misfortune, we could, each of us,  prepare quite a laundry list of stuff that makes life the pits…Yet, if we’re gonna be truly honest with ourselves, we would have to admit that at least some of this stuff is a self-fulfilling prophesy. Not that we want all this crap to happen, but maybe, just maybe, there are things we could have done to prevent the so-called bad luck from continuing. Like, how about taking the car in for routine maintenance before it breaks down…Or, instead of attributing your neighbors’ raise to ‘luck,’ maybe he worked harder, smarter, or simply had better negotiating abilities than you did. If you feel excluded by your peers, you might want to re-assess your own social skills.

So, and like the Boy Scout motto says ‘Be Prepared.’  True, it won’t always help to be pre-emptive, but it sure beats playing, or worse yet, being the victim. Yet, despite our best efforts, we’re all prone to being ‘snake-bit’, at one time or another.

The good news is that the Jobacle community can provide its own anti-venom. And the way to do that is for us to share our bad luck experiences, because the more we recognize what the real problems are, the better we’ll be prepared to cope and deal with them more successfully in the future. Let’s hear from you!