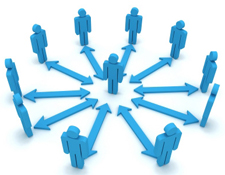 The world of business is dominated and controlled by networking. Companies which have the relevant skills and abilities for successful networking are often those which are most successful. However, networking is not all about big business events and traditional lunches. Here are five great examples of alternative networking:

1. Organize your own mini conference

Conferences are one of the primary forms of communication between different businesses and companies. They are typically hosted by larger establishments, but that doesn’t mean that you can’t have a go yourself.

Organizing your own mini conference is a great way to help you network with other businesses. Mini conferences offer the perfect platform for meeting new businesses, especially from within your local area. Invite businesses and make sure that you create a professional yet welcoming atmosphere.

2. Network during your commute

A good tip to remember is that business networking can occur at any time, in any place. Networking is not confined to the working day, so make the most of any opportunities which present themselves to you.

Networking during your commute is a great way to make new contacts. If you are using public transport during peak times, the chances are that you are going to be surrounded by fellow businessmen and women. This means that you have access to a much wider range of contacts than normal. Simply strike up a casual conversation and work from there. This will make networking more enjoyable and less stressful, hopefully yielding better results.

This idea can also be applied to flights and traveling associated with business trips. These journeys are typically longer, giving you more chance to make contacts among your fellow passengers.

3. Partake in a business breakfast

Business breakfasts are another innovative and alternative solution to networking. These events are typically held in areas with a large number of companies, such as business parks; Harwell Oxford Science Park, for example, runs very successful business breakfasts. Rather than subjecting attendees to lengthy presentations early in the morning, a series of short pitches are delivered to highlight key figures that are in attendance.

Further networking can then occur afterwards, in the luxury of a relaxed atmosphere. The great thing about business breakfasts is that they are informal and therefore more comfortable. This means that those involved are likely to be more responsive, leading to increased success rates.

Social networking has become increasingly popular within the business world, with a number of companies using this medium to promote their business and develop new contacts. Whilst there are some social networks exclusively dedicated to business networking, all social media formats can be utilised for this purpose. The best feature of this type of networking is that it is quick and versatile. Not only can you become linked with other companies but you can also connect with specific figures and individuals too.

Informal meet-ups are often organised within specific industries in order to promote networking. These events are perfect for businesses looking to make new contacts as they will focus on specific fields, meaning that only relevant contacts are made. The informality of the events remove some of the pressure of traditional networking activities, making them more effective. Try searching a site such as MeetUp.com to find suitable events.