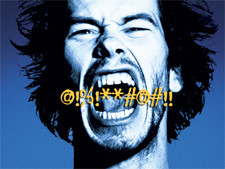 So today the popular mantra mandates that we drink white tea and eat dark chocolate, while avoiding the evils of caffeine and nicotine at all costs. Supposedly, by doing so, we’ll all be ‘healthier, wealthier and wise.’ We’ll also become the Zen-like, unemotional zombies that most corporations and offices really want us to be. Paragons of political correctness, we’ll just silently continue to suck it up, ‘living lives of quiet desperation,’ as Henry David Thoreau said.

As our daily frustrations continue to mount, we all too often end up with the unenviable – and equally destructive – choice, of whether to explode or implode. So while a few ‘go postal,’ others less dramatically simply get sour and sick, or just drop dead. And then there’s most of us, not quite at these extremes, but needing a freeing of the spirit, a healthy laxative, if you will, for the soul.

And that, goddammit, is cursing! Aside from sex, drugs and possibly rock ‘n roll, there’s no better cathartic on the market. Better yet, it’s free, legal, very individual and can provide an array of side benefits that can do wonders for your career.

Cursing is really a verbal shorthand that we use to express our feelings of anger when we’re thwarted, checked or otherwise prevented from achieving a goal or expressing ourselves. Cursing helps us get through yet another day at the office, going from point ‘a’ to point ‘b,’ without a helluva lotta bullshit in between. It’s a natural response, and has been used forever, cutting across all cultures and societies. Even the most prudish ‘golly gee,’ ‘gee whiz’ or other such terms, are nothing more than bastardizations of real, authentic curses that (OMG) one religion or another looked askance at.

Sure, you need very much to know your audience, and when in doubt the old silent, under your breath type of cursing is better than none at all. Generic cursing – or swearing – is also far safer than being so f’n stupid as to offend the innocent. For example, and beyond the obvious no-nos of singling out a racial or religious group for your public tirade, you also need to be alert to avoid insulting those with physical characteristics or other traits that you can’t stand. You never know if one of your listeners (or someone within earshot) may have an obese mate, a handicapped child or a jail bird for a brother. No, this isn’t at all about being politically correct, it’s about saving your ass from unnecessarily making enemies, a session with the EEO bureaucrats, or worse. Like they say, it’s really all about context.

Recently, the British Leadership and Organization Development Journal (stick with me, folks) conducted a study that found that "…frequent swearing can reinforce solidarity among staff and enable them to express their feelings". Not only is this right out of the military morale-building play book, but even The Donald, (in a Trump Blog), cited this study and fully agreed with the benefits that cursing provides. Prudently, he also advised that profanity should be kept to a minimum while in front of senior execs. or customers. Another benefit of cursing is that, when making a presentation, the use of a few strategically placed swear words, for emphasis, may well add just the right amount of spice needed to convince the audience of your sincerity and commitment.

As humans, we’re blessed (and cursed) with the ability to speak, and what a damned shame it would be if we didn’t use it to make ourselves feel a helluva lot better.