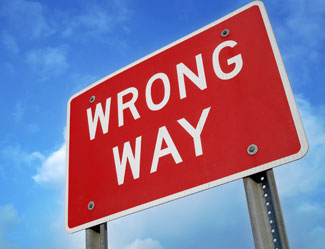 You wake up dreading each day at the office (or in the classroom, or behind the wheel of the bus, or behind the bar). That dread can be a clue that you are doing exactly what you shouldn’t be doing.

No matter how you obtain that much-needed paycheck, being in the wrong job can have deleterious effects on your psyche, relationships and physical health. Here are 6 signals you might be in the wrong profession.

The alarm clock induces a miserable feeling. If you can’t open your eyes at 6 am without being bombarded with anxiety about website performance and your sysadmin duties, it is probably time to explore your passion for pottery. On that note…

Midnight musings are centered on your professional purgatory. Waking up in the middle of the night sucks, but it’s worse if that time is filled with visions of interdepartmental monthly meetings filled with droning speakerphones and sanctimonious colleagues, it should send you right home to sell all of your used goods and start that rainy day bank account.

The smallest office annoyance can set you off. Working in close, or semi-close, quarters with a bunch of people that you kinda, sorta know almost guarantees friction. Your cubicle neighbor can’t figure out all the alerts on his cell phone? Pretty annoying. But if you already hate your day-to-day duties? That pinging will induce a murderous rage. If you notice yourself wishing ill health upon your co-workers for loud conversations or the way Cliff clicks his tongue and constantly drums his fingertips, it might be time to work on that resume.

Dreaming as much as the day is long. Getting distracted for a couple minutes by the latest crazy dog video on Buzzfeed is okay. Three hours of a Wiki-fueled deep dive into the origins of Westerosi nobility? That is intense. For instance, did you know that Bran Stark shares his name with Bran the Builder, who built the Wall with magic and ice and…OK, I got off on a Game of Thrones tangent there. Stuff like that is easy to do when you can’t stand looking at another spreadsheet. Studies say daydreaming wastes more office time than March Madness. That time could be spent researching another career.

You bend co-workers ears off with complaints about entrenched problems. We all know that senior management has no idea what they are doing. The path they are headed down will leave the company in shambles. You have made this point over and over again. Sometimes it just means that you need accept your place in the universe, or office, and keep that whining to a minimum. Or maybe it means that you need to be exploring other areas of financial fulfillment.

Your commute is a zombified march, complete with a movie of the day’s slights on repeat in your head. If that backhanded compliment your boss handed you at the 9:30 meeting is still running through your mind, 8-10 hours after it was uttered, you might be dwelling on it a bit. Your commute home to an ice-cold beer or delighted children (sometimes both) should be decompression time. If all you can do is relive the mundane and the marginally less mundane from that day at the office, it is time for a change. Use that time to brainstorm other paths that might make you happy. Maybe you want to craft handmade baked goods, but you are stuck selling insurance. Strategize your way to a night job at the local bakery or make a mental note to take culinary classes. Your drive home will be that much more productive.