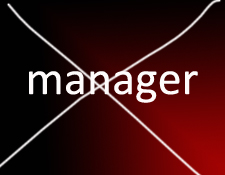 A wise man named Robert Frost once said, “By working faithfully eight hours a day, you may eventually get to be a boss and work 12 hours a day.” While many aspirations can lead to dreams of management, being a manager isn’t only about stuffing your pockets with larger paychecks and swimming in coworker respect.

Rather, many drawbacks come with being the boss that you should understand before becoming a manager. The following are five reasons why management may not be for you. After learning more regarding the dark side of being in charge, you may opt for other career routes.

Increased Responsibility
If you think your current job is stressful, just wait until you become a manager. From ensuring employees remain on task to completing departmental budgets, management duties far exceed those of entry level and intermediate level positions.

Employees who enjoy leaving work at the office door typically aren’t meant for management. Rather, when you become the boss, expect thoughts of work responsibilities to haunt many of your waking moments as well as your dreams.

More Administrative Work
As a manager, you can expect a large bulk of your workload to involve administrative tasks. Duties such as attending office meetings, creating schedules and addressing customer complaints typically consume a manager’s workday. If you’re a creative professional or another type of employee who enjoys specializing in a particular work niche, you must expect to give up that niche when becoming a manager.

Too Much Politics
Often, entry-level employees are shielded from the departmental politics of many companies. From budgeting wars to battles regarding which department will spearhead a particular project, managers are constantly fighting for office control. The employee who runs at the first sign of conflict likely won’t do well as a department head.

More Blame
As a lower level employee, you’re often given second and third chances when messing up with work projects. This typically isn’t the case in management. As a manager, you’ll be given less leeway to make mistakes and will take the bulk of the blame when your employees botch their work projects. So, as the saying goes, if you can’t take the heat, then stay out of the kitchen.

Longer Hours
Say bye-bye to the 9 to 5 schedule when accepting a management role. Often, managers become salary employees and, as such, are expected to arrive earlier and stay later than their employees. While standards vary with each company, you can typically expect to work much longer hours during your management years.

Still want to become a manager? If you aspire to someday accept a management position, thoroughly assess your reasoning behind this career move. Perhaps you dream of a larger paycheck. Maybe you want to earn increased respect from coworkers. While these benefits can certainly come with a change to management, you must also understand the drawbacks. From longer hours to increased responsibilities, being a manager isn’t always as great as it’s acclaimed to be.