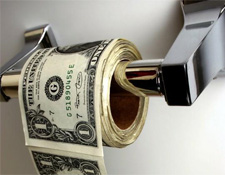 Does your credit impact your job performance?  That’s the question many lawmakers are currently considering.  Legislation has been introduced in California, Oregon, Washington and Hawaii to put an end to employee credit checks. Federal legislation is also being considered.  In the meantime, however, employers are allowed to check applicants credit files so long as they ask for permission. Businesses and credit bureaus oppose these bills.

Ken Lin, CEO of Credit Karma, says certain items in a person’s credit report may appear as red flags to employers. Lin is a seasoned industry veteran with more than 12 years developing statistical models and marketing programs for the credit card industry.  These red flags include:

Liens – Any type of lien against you could be a sign of irresponsibility.  It suggests to employers that you weren’t responsible enough to pay off your debt or negotiate a settlement.

100% Credit Utilization – This shows employers that you’re in over your head and can’t stick to a budget.

Bankruptcy/Foreclosure – Again this shows a lack of responsibility with things you’re committed to.  To an employer this could suggest that you’ll bail on large projects and aren’t resourceful enough. It also may suggest that you don’t have long term visibility.

Recent Late Fees – Recent 30, 60, or 90 day late fees show finances are causing you significant stress.  This activity may appear as more of a red flag for financial positions because it suggests you have trouble budgeting.

Significant Activity – A recent opening of several new accounts or closing of several accounts could appear as a red flag.  Significant new activity may trigger employees to think you are desperate and need extra credit because you are in over your head.  Closing several accounts could appear as a sign that you aren’t good with money and don’t know how to avoid charging up a large sum of debt.

Credit Karma provides truly free credit scores to consumers direct from the credit bureaus. Your scores are retrieved securely with no hidden fees.