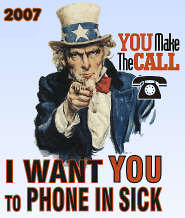 Start the year off right - plan your sick days now! Print the official calendar and get your excuses ready.  Only a sucker loses days at the end of the year!Martin Luther King, Jr. Day: You have a dream. And it's four straight days away from your boss's ugly mug and Microsoft Outlook. Call in sick on Friday, January 12 and Tuesday, January 16.  Winter's in full swing and the "flu" is hard to fight.  Make MLK proud!Valentine's Day: Romance has a price. You'll be oozing so much love that a full 24 hours to recover is in order. Get the sniffles so you can snuggle on Thursday, February 15.President's Day: Honor thy country. Since you didn't even know Hayes and Tyler were presidents, you better take off Friday, February 16 and Tuesday, February 20 to study.  I sense a headache.  *And for those of you with big cajones, you can bridge Valentine's Day and President's Day for a mini six-day festivus.Easter: It can't be "Good" Friday if you have to … END_OF_DOCUMENT_TOKEN_TO_BE_REPLACED 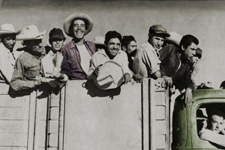 U.S. News & World Report has published the "Get-Ahead Careers for 2007."  You can find the article on Yahoo - but quite honestly, we feel it's a waste of time.  It's the same recycled list that you get every year.  With amazing advice such as:"Many experts predict further terrorist attacks on U.S. soil. If that should happen, watch for a hiring boom in the areas affected. A cyberterrorist attack, for instance, would produce lots of jobs for computer-security experts. If the water supply gets poisoned, toxicologists will suddenly be in high demand."Genius!"Immigration. The growth in America's Hispanic population seems likely to skyrocket, creating a virtually unlimited demand for translators, English-as-a-second-language teachers, and bilingual workers in healthcare and the legal system.Brilliant!!Don't get me wrong, many of the career sites have some great stuff to offer.  And when they do, we'll let you know about it.  But it's … END_OF_DOCUMENT_TOKEN_TO_BE_REPLACED

Today's history lesson! ;-) THE STAPLER: It holds together TPS reports and keeps down the carpet.  We can thank the analness of King Louis XIV of France for these "fastenating" devices.  Apparently, he insisted that the insignia of the royal court be inscribed with what came to be known as staples.  As the use of paper picked up steam in the 19th century, Samuel Slocum created a device that stuck pins through paper to keep it together.  Since momma didn't raise no fool, he was awarded U.S. Patent No. 56, 587.  Thankfully, staplers are about 2.5 pounds lighter than their predecessors - but that doesn't stop that last damn staple from jamming every time. THE PAPERCLIP: File this under 'anyone could have thought of that.' A thin wire bent into a looped shape that holds papers together via pressure.  The kick in the nuts is that the paperclip's inventor apparently WAS raised by a fool: he never got a patent.  However, that didn't stop the Gem … END_OF_DOCUMENT_TOKEN_TO_BE_REPLACED

This is a simple question from a simple man.  Like most of you, I toil the day away in a cube.  My only relief: a one hour lunch break and Digg.  You can imagine my surprise when I went to go submit a story yesterday and received this shocking message, "Access blocked. Consult your administrator."Red-faced with rage, I sat at my desk and zoned out for the rest of the day.  After some deep breathing I called my friend Jon.  He told me that he's NEVER been able to submit a story to Digg from work, let alone "Digg" anything.Since this blog and podcast is all about things work-related, I was wondering - is this a cultural phenomenon that we should all expect more of?  As sites get big, will our employers block us?  And if they do - do any of you know of any workarounds? Share the wealth!  Leave a tip on our toll-free hotline 888-786-1080 or e-mail us at jobacle@gmail.com. … END_OF_DOCUMENT_TOKEN_TO_BE_REPLACED

-Tumbleweeds.  No one is here today.  The early bird gets the worm, and those who were smart requested the days bridging Christmas and New Year's early in the year. (Put in your request for '07 now!) People are either using their remaining vacation days, milking their sick time or are still sitting on the porcelain throne from all the crap they've eaten. This means no meetings, no one blocking your way to the coffee pot and not needing to fake washing your hands in the rest room. -Faking it.  Nothing gets done this week.  Nothing.  Unless you're a doctor saving a life or a party planner putting together some New Year's eve bash - you've got nothing to do.  This is the kind of week that you realize that surfing the Web full time could actually get kind of boring. -Cleaning Up.  I don't know about you, but I clean my desk at the end of the year like I'm never coming back.  Besides, there's nothing else to do.  It's amazing how an empty desk … END_OF_DOCUMENT_TOKEN_TO_BE_REPLACED

Santa hooked you up.  You got sweaters, watches, and shiny new shoes.  Sure you're lookin' sharp - but you still have to report to that same dead end job tomorrow.  Your family should have known better (haven't you complained enough?) and bought you what you really need: something to save you from cubicle misery.  Hopefully you got some cash.  If so, here are four ways to spend it to get your career on the right track.Resume RevampYou never could get those bullet points lined up right. If you are leaking onto a second page and you're only on your third job, it might be time for a re-write.  It's a small investment considering you can make that money back in a single paycheck.  Don't shrink that font to an 8-point, let a stranger make you sound a whole lot better than you are!  *Listen in on the 01.07.07 relaunch of the WP for your chance to win a CV overhaul!Career Counselor SessionsStop talking and start doing!  A good career … END_OF_DOCUMENT_TOKEN_TO_BE_REPLACED 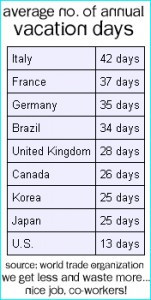 The end of the year means that every organization under the sun asks 10 people what think about something and then publishes the results.  Check out a quick roundup of recent career surveys below.  But first, allow us to spank your ass raw for not using all of your vacation days.  Congratulations America, you wasted 574 million vacation days in 2006!  Are you proud?  Seriously people, make 2007 the year you grow a sack.  No excuses.  If we don't take advantage of the little our employers give us - we get what we deserve.   It's YOUR time.  No guilt, no pay back, no thinking about "what are they gonna do while I'm gone."  I'll tell you what they'll do.  The planet will continue to spin and your company will be AOK.  #s: 58% Vow to Network More 75% Will Look for a New Job 69% Avoid Crucial Conversations32% Fake Illness to Get Out of Work62% of HR Folks Think Good Candidates Are FadingShame on those who … END_OF_DOCUMENT_TOKEN_TO_BE_REPLACED

Odds are you're all gifted out and getting ready to focus your attention on 2007 and the obligatory New Year's resolutions.  Listen, you'll still eat like a pig when no one is looking, you'll never exercise regularly and you'll still park like an asshole.The GOOD news is that a new study shows that almost 75% of people who make career resolutions actually keep them.  Rather then give you the typical "brush up that resume" type resolution, our resident career counselors are hard at work preparing a great segment for our podcast relaunch on 01.01.07 that will give you some fresh and new things to strive for.Making resolutions is easy.  Keeping them is hard.  Here are some tips from Online Recruitment Magazine on sticking to your guns and making 2007 the best year ever!1. Choose a resolution that’s meaningful. Resolve comes easier when it is focused on something specific. Forget your list of 10, go with two! 2. Be realistic. Everyone has setbacks, so … END_OF_DOCUMENT_TOKEN_TO_BE_REPLACED

F. Waldo McBurney has won "America's Oldest Worker for 2006," an award handed out by Experience Works (an organization which strives to improve the lives of older people through employment, community service and training).Now if I'm still working at 104 (heck, I don't even wanna be alive!), I don't deserve an award.  In fact, I'd consider myself a failure.  But the bee hive hauling, marathon running, bible toting senior has some good advice for all of us.“Worry shortens life and makes life miserable...The easiest way to shorten ones life is to do nothing.”Sage advice from a man who used to have to cut ice from a pond to keep the family refrigerator cool.  Why not take a time out from clankin' at that keyboard and staring at the screen to be thankful for folks like F. Waldo.  They let lazy bastards like you and me retire the right way - enjoying daytime TV, playing on open golf courses, traveling the world - or doing whatever … END_OF_DOCUMENT_TOKEN_TO_BE_REPLACED

For the second time in my career (lucky me!) a co-worker fainted within 10 feet of me.  I'll be honest.  I heard a thump, looked up, saw nothing - and assumed all was ok.  Two minutes later a secretary noted, "Oh my God, _______'s down." All kidding aside, I feel like crap for ignoring the thump.  So, if you hear an inexplicable sound - investigate. Aside from ignoring the poor guy as he lay motionless (it's our understanding that it was a case of extreme exhaustion from overworking), I realize that I hadn't a clue what to do.  Sure, call 9-1-1.  I left that to someone else. Then I bee lined for the HR office and let them know, figuring someone there would be equipped for this type of situation.  Beyond that, I was pretty helpless.  In hindsight, I don't remember a single employer telling me what to do to help a co-worker with a medical need.  The only disease they've ever taught me about is sexual harassment. So, let's go over some quickie … END_OF_DOCUMENT_TOKEN_TO_BE_REPLACED