Jobacle.com is proud to launch The Recession File, a daily audio broadcast that will deliver the latest unemployment news and layoff headlines in 90 seconds or less. Fancy production to follow. Grab the RSS feed! In the meantime, tell a friend and do your best to dodge those pink slips!Comapnies Mentioned: Intel, Starbucks, Caterpillar, USB Bank, TimelyDemise.com. … END_OF_DOCUMENT_TOKEN_TO_BE_REPLACED

E-shy began performing as a teenager as a spoken word poet on Manhattan's Lower East Side. Sounding like Eminem, he takes out his aggression against 'The Man' with his new song "I Hate My Boss."i don't wanna wake upi don't wanna go to workcause i hate my bossi'm gonna kill him … END_OF_DOCUMENT_TOKEN_TO_BE_REPLACED 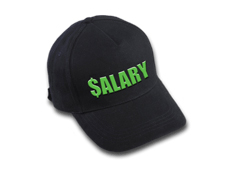 Those ever-so-popular executive compensation packages have been in the news quite a bit lately thanks to President Obama's decision to force companies to limit the amount of money they give to bank executives if that bank gets a bailout check. I think it's a bad idea for companies or the government to limit executive pay (although I may be the only one), and here's why.So Long, SuckersThink about this. Imagine that you are one of those highly-paid executives, and your company suddenly adopts a plan that will limit your pay. Now you have a choice. You can either stay at your current job and get less pay, or you can move to a company down the road that would love to get your skills working for them (and they will be paying a premium for your services). What are you going to do? We both know that you're going to move to the new company for more pay. Why would you expect an executive to do anything different?You Get What You Pay ForIf you want a good, top-shelf executive to run your … END_OF_DOCUMENT_TOKEN_TO_BE_REPLACED

Jobacle.com is proud to launch The Recession File, a daily audio broadcast that will deliver the latest unemployment news and layoff headlines in 90 seconds or less. Fancy production to follow.  Grab the RSS feed!  In the meantime, tell a friend and do your best to dodge those pink slips!Comapnies Mentioned: Muzak, Harvard, Wal-Mart, Bureau of Labor Statistics' Job Openings and Labor Turnover Survey. Direct Download … END_OF_DOCUMENT_TOKEN_TO_BE_REPLACED 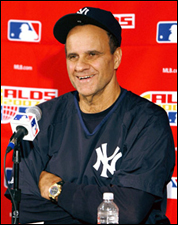 If anyone in Major League Baseball seemed to stand in stark contradiction to the corporate fat cat owners, and their armies of accountants and attorneys, it was always Joe Torre. Yup, good ole Joe who, despite the fact that he's a millionaire many times over, possessed what can best be described as that 'common touch' we in America love so much. While the standard M.O. of the Steinbrenners and others of their gizzillionaire ilk is to operate on the profit uber alles mentality, Joe appeared to stand for principles, for leadership, and above all for loyalty.Yet to many, including not only baseball fans, but sportscasters and even players, Torre's previous populist persona has been besmirched by the revelations he recently made in his new book. True, and while the entire bio isn't all that kiss and tell, Torre does take a good number of swipes at not only the Yankee management, but at some players as well. Probably everyone can either agree with, or at least understand, Torre's taking on … END_OF_DOCUMENT_TOKEN_TO_BE_REPLACED

Jobacle.com is proud to launch The Recession File, a daily audio broadcast that will deliver the latest unemployment news and layoff headlines in 90 seconds or less.  Fancy production and RSS feed to follow.  In the meantime, tell a friend and do your best to dodge those pink slips! Comapnies Mentioned: University of Chicago Medical Center, FedEx Freight, McDonalds, Recessionwire. Direct Download … END_OF_DOCUMENT_TOKEN_TO_BE_REPLACED 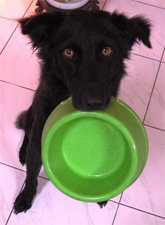 It holds all the same signs. Sweaty palms, rambling stories, nervous laughter, and in some unfortunate situations, begging and pleading.Sounds like a desperate first date, right?Sadly, I found myself precariously on the brink of desperation during my first interview since joining the Pink Slip Brigade. With job security and stability suddenly at its highest premium to me, I was practically salivating at this managerial position working for a state-funded university.As I sat in the front office awaiting a turn to impress my future bosses, I realized that I quickly needed to calm myself down. Here is how I turned from desperate to playing hard to get.1. Interviews are about confidence and highlighting your attributes as they relate to the intended position. Trying to convince your boss that “you’ll do anything necessary to get the job done” sounds desperate and somewhat slutty in comparison to telling them exactly what you think needs to be changed to get the job done … END_OF_DOCUMENT_TOKEN_TO_BE_REPLACED 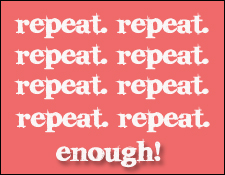 What's up with all of the repeating? Lately I've noticed that too many people - young people - repeat themselves again and again. We all know repetition has a distinct persuasive effect on us. That's why kindergarten teachers and fast food restaurants go back to the well so many times in a row.But when it comes to the world of work, and everyday interactions, too many people are repeating themselves.Here are reasons not to repeat.- You bore me, and I'm already bored enough.- You lose credibility. I start to think you don't care who you're talking to, you're just talking for the sake of talking.- You are not Dylan Thomas and have no reason to distinguish free verse from prose.- Your motives are transparent. You are trying to convince me of something but I am on to you, therefore, I will not change my mind.- Repetition creates familiarity, but familiarity breeds contempt! Just cause you shove it front of my face again and again doesn't mean I'll buy it.If I happen to repeat a message, … END_OF_DOCUMENT_TOKEN_TO_BE_REPLACED 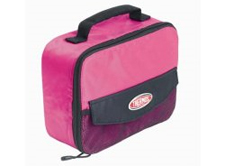 Does anyone out there know what percent of office workers go home for lunch? It's something I always wanted in my work-life, and now that I have it, I'm not convinced it's all I thought it was cracked up to be.It takes me between 12 and 22 minutes in each direction--short enough to be a viable option, but long enough to make it not worth my time.We've talked about the downside of living too close to the office. But now let's see if there's a real benefit in heading home for lunch.Read more of my blog post at US News and World Report. … END_OF_DOCUMENT_TOKEN_TO_BE_REPLACED