Unspoken status symbols at work don't make the employee handbook, but they do cross lines of sanity.Who knew that one day, Michael would aspire to achieve a great number of ceiling tiles?  You see, at his full-time job, success is rewarded with 12" x 12" squares hanging over your head.  The higher up the ladder you climb, the more ceiling tiles you are issued. For the record, we're not talking about moving someone from a cubicle to an office. We're talking about counting tiles - literally - and then pushing out your cube walls to give you more space.But wait, there's more!  The size of Michael's chair counts too. Entry-level peons get a low-back seat, mid-level employees get a mid-back (arms available at your boss's discretion) and high-backs go to, you guessed it, The Suits.Without a doctor's note, there are no exceptions. Just ask Larry.  The Chair Police literally wheeled away his seat when he was in the bathroom. Apparently, he inherited the chair when … END_OF_DOCUMENT_TOKEN_TO_BE_REPLACED 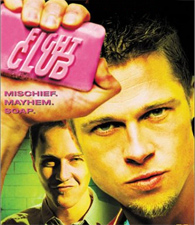 Sometimes I'll come across a post that I wish I would have written first! The gang at Alternative Reel have put togeter the "Top 10 Quotes Against Work."Check out some of the list below and visit their post to read the rest.#10 - AMBITION“It was true that I didn’t have much ambition, but there ought to be a place for people without ambition, I mean a better place than the one usually reserved. How in the hell could a man enjoy being awakened at 6:30 a.m. by an alarm clock, leap out of bed, dress, force-feed, sh*t, piss, brush teeth and hair, and fight traffic to get to a place where essentially you made lots of money for somebody else and were asked to be grateful for the opportunity to do so?”—Charles Bukowski, Factotum, Black Sparrow Press, 1975#09 - CONTEMPT"My job consists of basically masking my contempt for the as*holes in charge, and, at least once a day, retiring to the men's room so I can jerk off while I fantasize about a life that … END_OF_DOCUMENT_TOKEN_TO_BE_REPLACED 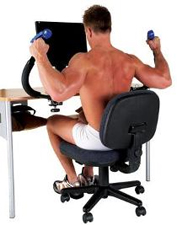 One day, someone will invent a contraption that allows office workers to exercise while planted on their fannies. Burning calories while writing reports would be the ultimate in multi-tasking. The latest piece of exercise equipment to try to bridge your desk and the gym is the SpringFlex UB. Before I tell you about the bells and whistles, I feel I must disclose the fact that this piece of equipment is available for purchase in Sky Mall.  Yes, the magazine that we're forced to read 10,000 feet in the air. And yes, the same magazine that sells a hot dog toaster.The SpringFlex is designed to tone your upper body, curb weight gain and keep your metabolism in motion, all while minimizing injuries associated with repeated movements. (i.e. - mouse clicking, keyboard tapping)Unlike the expensive and large WalkStation we told you about last week, the SpringFlex is reasonably sized and sells for approximately $80. Considering the cubicle Bowflex wannabe claims it can perform 120 exercises, … END_OF_DOCUMENT_TOKEN_TO_BE_REPLACED

Site: The Career MoleSlogan: Meet. Refer. ProgressPros: Targeted networking; receive inside informationCons: Pay per connection; Moles' motives are not made clearOne of the best ways to increase your odds of landing a job is to tailor your resume, interview responses and appearance to the company's culture.  Of course, more often than not, you might not have any contacts within the organization. That leaves you at the mercy of information posted on the employer's Website. Until now.Thanks to The Career Mole you can access unfiltered and unadulterated information from people who work at companies you are targeting.  Unlike many job vent Websites, the 'Moles'' goal is to deliver insight (both good and bad) and give you the inside track on job vacancies, all while preparing you for the interview process.A Mole can chat with you, look over your resume/cover letter and help you prepare your application.  The major downside to this is that, in reality, you don't know much … END_OF_DOCUMENT_TOKEN_TO_BE_REPLACED 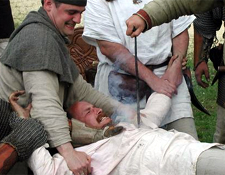 As if corporate America didn't already suffer from enough obsessions as it continually tries to make an even larger profit while pretending to be humanistic, a new neurosis has now taken root on the company psyche. That is the seemingly urgent need to label everyone in an easily-digestible capsule.  What better way to force human labeling than the requirement that we all wear, and 'proudly' display, the company ID card. It beats, I suppose, bar-coding on our collective forehead. Although that may well come next, along with retinal recognition and an assortment of other biometrics.From the White House to the Big House (even prisoners get to wear ID cards), everyone's marked. It's like we've all become canned goods in the supermarket soup aisle. In a similar way, we've become effectively labeled and branded. The ID card really tells a great deal, just like Campbells Soup; content, price and, for some, expiration date. They say it's because of security, that everyone needs to be on … END_OF_DOCUMENT_TOKEN_TO_BE_REPLACED

Winter is fading into spring, and I for one, am waiting with open arms.  Aside from enjoying sun-drenched days from the discomfort of my cubicle, I'll also be paid a visit by some of my favorite annual guests: THE INTERNS.Wide-eyed on day one, disgruntled by the end, these college-aged kids come in for a resume boost, three credits and to get mom and dad off their back.  Sometimes there's nothing like new ideas and energy to brighten up the joint!CollegeGrad.com, which specializes in entry-level jobs, has announced the Top 200 Intern Employers for 2008.  That will equate to more than 46,000 interns. Walgreens alone plans to hire 7,350 interns.Read more here.Other interesting results yielded by the survey include:53% of participating companies plan to hire more interns than last year25% will be hiring fewer interns than last year2008 will have 0.52% more interns than 2007Looking for an entry-level gig? Find out which companies are filling positions in '08.While targeting … END_OF_DOCUMENT_TOKEN_TO_BE_REPLACED

Daniel Kuch, a Washington resident, has admitted to having his friend shoot him in the right shoulder in order to get out of work.Jeez. We never thought anyone would take our Sick Day Calendar THAT seriously.Allegedly, Kuch was looking to avoid a mandatory employer drug test.  He figured the shooting, which he originally told police was a drive-by, would get him off the hook long enough to let the drugs leave his system. At least the drugs didn't impair his judgement.Kuch has been arrested for lying to authorities, and his buddy (what a friend!), Kurtis Johnson, gets charged with reckless endangerment. I've heard a lot of crazy excuses for getting out of work, but this one has got to take the cake.  Even at my most desperate moments, I've never thought of getting shot to escape the perils of work.  Saying your shot is one thing, but actually taking the bullet is another mess entirely. … END_OF_DOCUMENT_TOKEN_TO_BE_REPLACED

This is a guest post by Kate Gatto.Company: Razume.comSlogan: Your Resume Review CompanyPros: Resume rating scales; information blackouts for privacy.Cons: Anonymity; inability to ask follow up questions; weak profile pagesRazume is an online community that lets you upload your resume and get it reviewed by a community of users who have also submitted their resumes. This lets you get comments and suggestions for improvements on your resume in an entirely anonymous atmosphere. Your privacy on Razume is 100% guaranteed.  As a matter of fact, it's mandatory.  You are forced to block out any identifying information on your resume when you submit them for review.  Which is great if you don't want your boss to know that you're getting ready to go back on the market. However, it's lousy if you're hoping to do your search under the radar while making connections.Razume might want to consider hiring the Resume Hunter.The anonymity of your commenter's is a double-edged sword: … END_OF_DOCUMENT_TOKEN_TO_BE_REPLACED

He got his start laying pipe for the Atlas Water and Sewer company.  Eventually, he climbed the ranks, becoming responsible for a staff of 800 and annual revenue exceeding $120 million. His name is Victor Kipling. This is his weekly column.   As the late, great Lee Marvin tells his Dirty Dozen, 'there is no escape, there is no appeal.' And so it goes for all of us, as we're constantly bombarded with the political bluster and bombast that yet another presidential primary season brings. Thanks to media super-saturation, be it on the blogosphere, in print or on the tube, they all provide the same inanities, day after tiresome day. We now see and hear these three potential candidates running between venues, imploring, pleading, demanding and sometimes even whining, doing almost everything they can in order to get our support. And all on our uncomplaining dime, no less. One can almost feel sorry for these three, 'cause, and whether you support one or the other, or none … END_OF_DOCUMENT_TOKEN_TO_BE_REPLACED

While we're not quite sure that the world needs another Website that allows employees to spill the beans on their current and former employers, we'll tell you about JobBite anyway.  Cause any career destination that helps put the power back into the hands of the job seeker is a good thing.JobBite is completely anonymous and does not require users to register to read or submit reviews.  The reviews are designed to provide potential employees with insight about an organization that they might otherwise not be privy to.  From corporate culture to the dress code, share any information you feel would be helpful in assisting a job seeker make an educated decision.  Companies are found on the Website via search box or alphabetical listing.As with all sites of this nature, success lies with you, the user.  If JobBite quickly accumulates a mass amount of reviews, they have a fighting chance. … END_OF_DOCUMENT_TOKEN_TO_BE_REPLACED