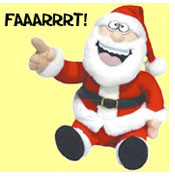 Are you buying a gift for your boss this holiday season?  I’m not.  And I actually like the guy. I am a big believer that employees should NOT buy their bosses holiday gifts. Every year we all wrestle with the issue of who to buy for at the office and what to get them.  Here are some rules and reminders that will hopefully alleviate some of the holiday pressure.DO IT PRIVATELY: If you plan to give a gift to your boss or a colleague it should be done privately.  Public displays of gift giving open you up to criticism and judgment.“Oh my God, did you see what a kiss ass Andrew is?”“He didn’t tell me he was giving XYZ a gift!”“That’s all he spent?”Gift giving is a personal choice that should come from your heart.  Do your best to keep it quiet and personal.LEARN THE CULTURE: The holidays can be particularly difficult if you’re the newbie at the office, as you have no idea what to expect.  Rookies … END_OF_DOCUMENT_TOKEN_TO_BE_REPLACED 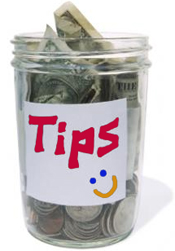 I’m happy to report that holiday tipping is not a problem for me. In fact, I didn’t even know it existed until I was in my twenties. I’m talking about the outrageous holiday gratuity exercise of bringing holiday cheer to people that play bit parts in your life, $50 at a time. The doorman, the mailperson, the gardener, parking attendants, trash collectors and so on.  People's hands certainly aren't extended, and I doubt my subscription to Wired will suddenlty start to disappear if I don't tip.  However, are we really breaking etiquette laws when we decide not to extend a gratuity?Where I live trash companies are privately run. Since I have no real relationship with my trash collectors, I feel no need to tip them. To my understanding, tip itself is actually T.I.P. and it stands for “To Insure Promptness.” So when the hell did it become such an automatic? Do I really need to kick in more than the monthly fee that the company came up with in … END_OF_DOCUMENT_TOKEN_TO_BE_REPLACED 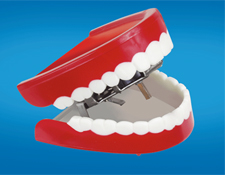 After a pretty heavy week here in Jobacle Land, we are pleased to bring you the Forward of the Week, kindly submitted by Shawna from Florida. Things You Wish You Could Say at Work:1. I can see your point, but I still think you’re full of shi*.2. I don’t know what your problem is, but I’ll bet it’s hard to pronounce.3. How about never? Is never good for you?4. I see you’ve set aside this special time to humiliate yourself in public.5. I’m really easy to get along with once you people learn to see it my way.6. I’ll try being nicer if you’ll try being smarter.7. I’m out of my mind, but feel free to leave a message.8. I don’t work here. I’m a consultant.9. It sounds like English, but I can’t understand a damn word you’re saying.10. Ahhhh .. I see the screw-up fairy has visited us again.11. I like you. You remind me of myself when I was young and stupid.12. You are validating my inherent mistrust of strangers.13. … END_OF_DOCUMENT_TOKEN_TO_BE_REPLACED 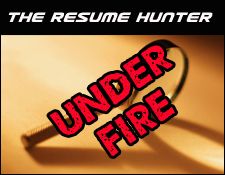 Looks like we've got a heated debate on our hands here at Jobacle!  I'd like to take a moment to address our loyal readers and the thousands of new people that have joined us over the past few days.  A feature that pops up every few weeks on Jobacle is the Resume Hunter.  This is an exercise where the Hunter locates a public resume and brings the document's faults to light.  The hope is that both the resume poster and the general public can glean a bit of useful information from the exercise.  Allow me to clarify a few things:- The Resume Hunter is not designed to be mean-spirited.  The honest-to-God goal is to actually HELP people learn from common (and public) mistakes.  I never anticipated this volume of negative feedback.  At this time I do not plan to pull the feature.  In fact, we have another one hitting the Web next week (so subscribe!).  The Resume Hunter is a new twist on dishing out useful information.  It would be easy … END_OF_DOCUMENT_TOKEN_TO_BE_REPLACED

This is a guest blog post by job hunter Sally Lawton.   Company: Jobfox.comSlogan: Be the HuntedPros: Creates a professional Webpage; generates a skills list; automatically matches candidates to jobs; protects job-seeker’s informationCons: Limited sample size; limited job and skill categoriesDo you ever wish that the “I’m here for networking” option on MySpace could actually help your career? Jobfox.com takes the personal-page layout of MySpace, and gives it a professional edge, leaving job-hunters confident that employers will see them at their professional best, and not at their partying best.The professional Webpage generated by Jobfox can be a powerful marketing tool because it offers a centralized location for a candidate’s resume and portfolio. The page also offers a skills map, a list of what the candidate wants in a job, and an “about me” section. The skills map shows how a particular position generated a candidate’s … END_OF_DOCUMENT_TOKEN_TO_BE_REPLACED 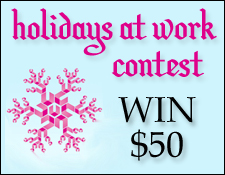 The holiday flood gates have officially swung wide open. In fact, as I type this, I'm surrounded by strings of lights, faux snow flakes and poinsettias. They're probably at your office too;"Ambiguous decorations" as to not offend anyone. I hate being a Grinch. I LOVE the holidays - when I'm with my family and friends. Holidays at work, however, are nothing but a land mine-filled mess. Career media will trot out their annual Holiday Party Dos and Don'ts list. (It's already started) As always, it will be stale information. These same folks will fabricate stories of office party chaos. You know, the one where the boss and the administrative assistant had too much to drink? It's all BS. December is jam-packed with bizarre office rituals. For example, this Holiday Door Decoration Contest that was submitted by an anonymous Jobacle reader. Listen, anything with that many rules that is judged by "The Quality of Work Life Committee" simply can't be fun! Here's some insight into my … END_OF_DOCUMENT_TOKEN_TO_BE_REPLACED 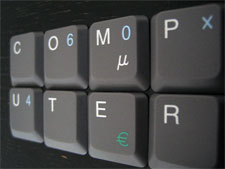 Episode #75 of the Working Podcast brings you the following career advice and employment news: - 5 reasons why it's important to talk to your boss, manager or supervisor if you want to get ahead in your career. - My wife, who knows absolutely nothing about technology, helps bring you the hottest tech careers for the next decade. - The Career Filter, the part of the show that brings you the hottest career resources, shares 5 Facebook apps that can help you land a new job. Plus learn about Jiibe and Web-based project management tool 5pm. If you've ever written an office memo (or just read one!) we've got a great song for you. There are three ways to listen: - Stream on our homepage (shows plays instantly) - Stream from the player below (about a 60 second load time) - Download direct … END_OF_DOCUMENT_TOKEN_TO_BE_REPLACED 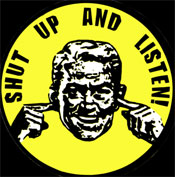 The world's population is roughly 6.6 billion people according to Wikipedia. Despite the enormity of that number, there are a disproportionately lower number of outward personality traits one can display; i.e. - the wallflower, the overachiever, the comedian, the bully, etc.  Unless you work in an office of only three people, you likely work with people that encapsulate a good assortment of these characteristics.Out of these traits, the one that fascinates me the most is the over-opinionated know-it-all that loves to share his or her opinion as fact. You know the type.  They catch you in a break room and give you the lowdown on politics or the problem with today's music or the key to the Jets failed season.  Or, if you're really unlucky, they'll chew off your ear on a multitude of subjects. Their focus is usually on what they see as a problem, and their conviction often comes off as arrogance.Not only do they know everything, they also love to unload this … END_OF_DOCUMENT_TOKEN_TO_BE_REPLACED 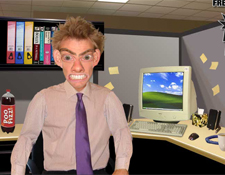 As another month of Jobacle-mania wraps up, here's what's on my mind:1) Thanks to the ladies at Clearchannel's NewsRadio 740 KTRH in Houston, TX for giving us some love.2) The time waster of the month has definitely been the Cubicle Freakout Game. How much destruction can you unleash on your cube in the allotted time period?3) The Working Podcast continues to grow rapidly, especially in Asia!?  For some reason we've been getting a nice clip of traffic from qq.com and music.soso.  I have no idea what they're saying about us...but thank you...I think!  Can anyone translate?4) An open message to career blogger posers.  You know who you are. Download the 90-second rant.5) According to a recent Vault survey, 89% of employers are interested in viewing video resumes. If that's the case, we think about 88% of them will be disappointed. While video has swept the Web, we here at Jobacle still feel the video resume has nowhere to go but up. Vault recently wrapped up their … END_OF_DOCUMENT_TOKEN_TO_BE_REPLACED 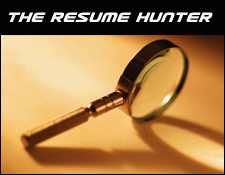 We here at Jobacle are on an endless hunt for the perfect resume. And we're pleased to report that so far, it's nowhere to be found. Cue the music, Bob. It's time for the Resume Hunter! Today's lucky contestant is Vinay Pandey of New Delhi. Fluff: The first thing I gather from this resume is NOTHING. After reading his objective I have no idea what Vinay does or wants to do. Be clear in your objective; especially if you want to work in HR. Also keep it short and to the point, and for God's sake, no run on sentences. Grammatical errors are completely unacceptable in this day and age. Word processing has come too far to allow misspellings. If anyone can figure out Vinay's objective, please explain it to me because I'm lost. If one has enough technology to post a resume on the Internet, one has the technology to make sure that what they write is grammatically correct. Or at least darn close. Layout: A Google search of "resume format" garners roughly 22 million results. There is no … END_OF_DOCUMENT_TOKEN_TO_BE_REPLACED