It's another exciting episode of your favorite employment podcast that loads you up with free career advice: The Working Podcast! Here's what you'll hear... -Learn how to be the anti-Britney Spears at work. - Interview with the co-founder of Payscroll.com, a Web site that reveals salaries and has a career questions and answers section. - A tool that shows you what you earn a second.- Comment contest winners announced. There are three ways to listen: - Stream on our homepage (shows plays instantly) - Stream from the player below (about a 60 second load time) - Download direct … END_OF_DOCUMENT_TOKEN_TO_BE_REPLACED 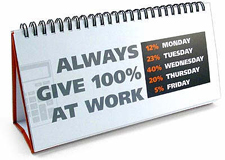 It's Friday,  and you have our permission to punch any of your co-workers that  go around announcing, 'TGIF.'  Here's your weekly Jobacle Mishmash.1) Most of you make an annual salary and have moved beyond hourly wages, but we know you're still curious to see how you earn money in real time.  Thanks to this nifty clock you can calculate how much you're making per month, week and hour.  It's fun and depressing - all at the same time! 2) Hey boss, F**K YOU!  Dropping an F-bomb or two around the office could land you that long-deserved promotion. Okay, maybe not. But a new study says that occasional cursing among colleagues can foster solidarity and help express feelings of stress and frustration.3) Halloween at work can be scarier than any Michael Myers movie! Subscribe to the Jobacle blog now and stop by to trick o' treat next week when we talk about some ghoulish office events.  Also, be sure to place your order now for this year's most popular … END_OF_DOCUMENT_TOKEN_TO_BE_REPLACED 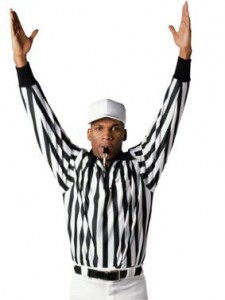 There aren’t too many (if any) full-time positions in the world today that pay as high as $70k a year and require little to no education. There is on the other hand one part-time position that does have that earning potential and it doesn’t require you to do anything illegal either. You might want to pick up a whistle because that is currently the going salary for an NFL referee. That’s right. Think you can handle a taxing four hours for 16 Sundays every fall and winter? Perhaps you’d like to travel the country and have a pass to be right in the middle of all the action. If so a part- time career might be waiting for you. Of course nothing that good could come so easily. First you’re gonna have to earn some stripes.Now, if you are one the lucky few, you’re going to want to be smart with all this extra money coming in. Refereeing is a contractual gig and there is always the chance that you could not be picked up next season. Referees are also reviewed … END_OF_DOCUMENT_TOKEN_TO_BE_REPLACED 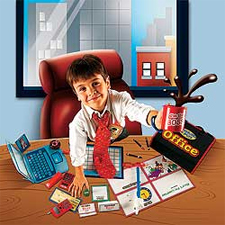 For centuries parents have warned their children that they should be in no rush to grow up.  Aside from the obvious "additional responsibilities" and inevitable medical woes, one of the reasons moms and dads want you to stay young is to protect you from the dreaded 9-to-5  rigmarole that they are subjected to.Then let me ask you this: What parent in their right mind would buy the Pretend and Play Office!?I came across this horror show yesterday while wandering around Target aimlessly as my wife shopped for Halloween goodies.$30 gets you an "official-looking" briefcase, pretend stapler and ID badge - plus dozens of other "office essentials."  Pushing pencils, filing papers and fingering a laptop are hardly  feeding the imagination.  I wouldn't wish those tasks on my worst enemy, let alone some innocent, wide-eyed kid.We are a work-obsessed culture.  The cult DVD success of Office Space; the rise of The Office around the globe; … END_OF_DOCUMENT_TOKEN_TO_BE_REPLACED

Custom vehicle magnets seem to be gaining in popularity. I'm not sure about your neck of the woods, but in mine, you can't escape seeing realtors big faces stuck on cars. BuildASign.com offers low prices (as los aw $21 with unlimited colors) if you're looking for a custom banner, magnetic car signs, parking, political, or plywood signs. Maybe these realtors are on to something. Should I put a huge JOBACLE.com on the side of my car? … END_OF_DOCUMENT_TOKEN_TO_BE_REPLACED

He got his start laying pipe for the Atlas Water and Sewer company.  Eventually, he climbed the ranks, becoming responsible for a staff of 800 and annual revenue exceeding $120 million. His name is Victor Kipling. This is his weekly column.For some reason, and even among those of us who snoozed during history class, we know - almost intuitively - to avoid, avert and stay very far away from anything to do with 'isms.' There's an almost primitive gut feeling that kicks in and tries to alert us to the fact that most isms are, well, bad for you.Nope, this isn't about the usual suspects; capitalism, communism, fascism or even etceteraism. Instead, it is about another  ism, and I guess you can label it an organism. That's because it's growing, like a rampant infection, without apology,  appearing all over the workplace. Its name? NEPOTISM. By far one of the ugliest, most frustrating and morale-destroying of the isms. Worse yet, it's one that almost all of us have been … END_OF_DOCUMENT_TOKEN_TO_BE_REPLACED 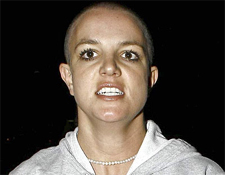 It's one thing to be a woman and lose custody of your kids.  It's another not to even show up at the hearing and pretend you want them back!The eighth best-selling female artist in American music history might not have much to teach us about life - except about how NOT to behave.  Here are four ways to make sure you accelerate your career by not being like Britney Spears.Put Yourself FirstIn order to keep harmony between your mind and your body you must listen to your body. This includes sleeping when tired, eating when hungry and being kind to yourself.We understand it's not easy for poor Britney with the Paparazzi breathing down her neck and all.  But you don't have people camping outside your house, do you?  So you have no excuse.Make time for yourself and you will think clearer, make better decisions and put your career on the right track.Under the InfluenceAnd we're not talking about that flask of tequila in that bottom drawer.  You must operate as an … END_OF_DOCUMENT_TOKEN_TO_BE_REPLACED 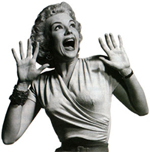 And by "even" I mean "even tempered." Anger at work is bad news and can lead to things much worse than just hating your job. On this episode of the Working Podcast you'll learn: -Simple tips that can help keep you calm while you're at the office. - The latest career resources, including pocket resumes. - An interview with Bruce, the founder of DayJobNuker, a Web site that chronicles his dislike for the 9 to 5 and how he plans to make ends meet by making money online. There are three ways to listen: - Stream on our homepage (shows plays instantly) - Stream from the player below (about a 60 second load time) - Download direct … END_OF_DOCUMENT_TOKEN_TO_BE_REPLACED 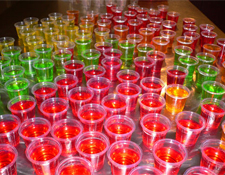 You know the drill.  If I suffer, you suffer.  Here's the most recent forward to hit my inbox - three times!  Don't you people have any work to do!?21 Uses for Vodka (Other Than Drinking It)1. To remove a bandage painlessly, saturate the bandage with vodka. The solvent dissolves the adhesive.2. To clean the caulking around bathtubs and showers, fill a spray bottle with vodka, spray the caulking, let set for five minutes and then wash and clean. The alcohol in the vodka kills mold and mildew.3. To clean your eyeglasses, wipe the lenses with a soft, clean cloth dampened with vodka. The alcohol in the vodka cleans the glass and kills germs.4. Prolong the life of razors by filling a cup with vodka and letting your safety razor blade soak in the alcohol after shaving. The vodka disinfects the blade and prevents rusting.5. Spray vodka on vomit stains, scrub with a brush, then blot dry.6. Using a cotton ball, apply vodka to your face as an astringent to cleanse the skin and … END_OF_DOCUMENT_TOKEN_TO_BE_REPLACED 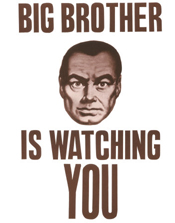 It’s true. Just this week the unthinkable happened. The old-fashioned, clueless, heartless, SOB that runs my company had his IT department put the mother of all firewall, filter, padlock, security alarm protected, deadbolts on our network. We were prepared for it during a company meeting. One of the many recent converts to the idea that the Internet is nothing more than a toy that will squelch productivity and lure people into the darkest and seediest corners of the World Wide Web. At first we were told that HR (the watchdog, judge, and jury for our web browsing) would be making sure not too much time was spent online, and that employees were not going to naughty sites. They were also going to be looking for “trends”, i.e.; Sally was on jobacle.com for four minutes one morning… perhaps it could slide, but if Sally felt the urge to spend those four minutes of company time every morning at jobacle.com reading the latest blog during her morning joe, well, Sally … END_OF_DOCUMENT_TOKEN_TO_BE_REPLACED